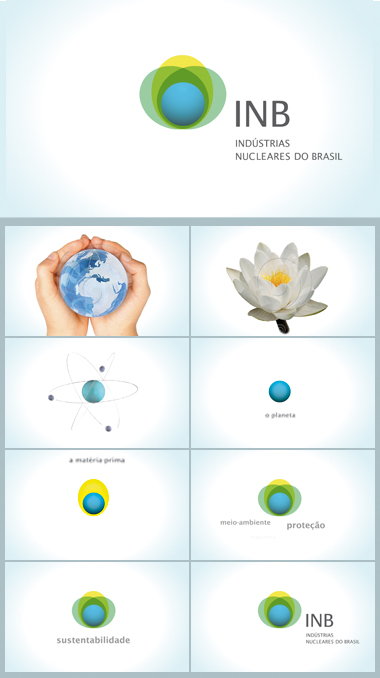 A suggestion for the new trademark of INB Industrias Nucleares do Brasil, an uranium production company based in Brazil, under the Ministry of Science and Technology. The client demand was the logo might inspire sustainability, transparency and security. **Individual work**
:: for INB, at Rio de Janeiro, 2012

Adhesive labels. One of them designates the holder where visitor’s wet umbrellas should be placed. The other one, indicates the trashcan. **With GrevyConti’s team / Project manager: Rossella Conti**
:: for White Martins (at GrevyConti Design+Comunicação, at Rio de Janeiro, 2012)

Print material for Ampla, a company of generation and distribution of energy at Estado do Rio de Janeiro. Many of them related to environment concern and events inside the company. **With: GrevyConti’s team / Project manager: Valeria Grevy**
:: at GrevyConti Design+Comunicação, at Rio de Janeiro, 2012 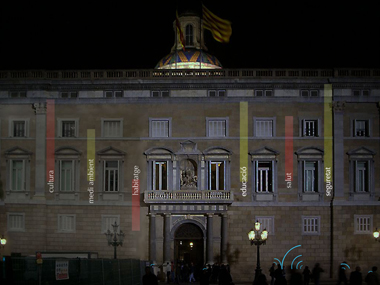 Can the technology ancourage the citizens to express their opiniões? Proposal of public intervention at the building of the government in Catalonia. Through votes sent by sms, the people could show their level of satisfaction about public administration. **Individual work / Orientation: Victor Viña**
:: at ELISAVA, Universitat Pompeu Fabra, Barcelona, 2008

Fluxu, the os that flows

Fluxu is a proposal of an operating system with a new mental model. Its concept is the information flow. Its metaphor, the rivers. The paradigm is the categorization by tags. The rivers start from their sources, follow their courses, branch off and meet the ocean. In the same way, the information in Fluxu, through the tagging, is organized by categories. Each source receives a name and, according to its information volume, they become larger, with possibility to branch off according to the hierarquy that has been previously defined by the user. **Orientation: Victor Viña**
:: at ELISAVA, Universitat Pompeu Fabra, 2008 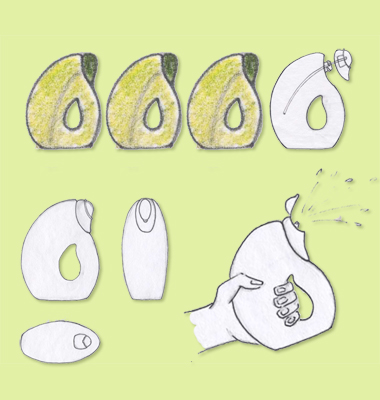 Sketches for plastic packaging for cleaning products. The shape refers to drop, leaf, cleaning.
:: at Senac, in the course "Packaging: technology, design and innovation in plastic", 2005

Furniture designed to Architecture and Design courses. Many ways of layout is possible according to the needs in each kind of class: discussion, conference etc. **Graduation project / Orientation: João Bezerra**
:: at ESDI, Escola Superior de Desenho Industrial da Uerj, 2005 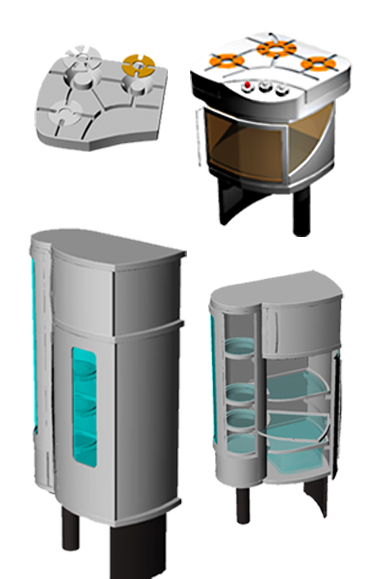 One of the most interesting things in the design process is the research and the brainstorming. In this academic project, the team had the elder people as the target. A questionnaire was administered by us in face-to-face interviews. Based on the information originated from the interviews, we could reach some really innovative ideas. A minimalist oven/cooktop makes the cleaning easy, the bottom supports for the pans change their color according to the heat, preventing burns. The refrigerator is also part of the project. Its cilindric part is supposed to be destinated to keep foodstuff that will be used more frequently. The other part of the fridge, larger, has trays that can be acessed simply rotating it. All the innovation with the object to prevent accidents. **With Isabela Menezes and Mariana Kaufman / Orientation: Freddy Vam Camp**
:: at ESDI, Escola Superior de Desenho Industrial da Uerj, 2003

Designed to be used in schools, this system enables the user to choose two different layouts. As the matter of recycling links with the theme of the nature, the design evokes something organic in form and movement. **With Isabela Menezes / Orientation: Freddy Vam Camp**
:: at ESDI, Escola Superior de Desenho Industrial da Uerj, 2003 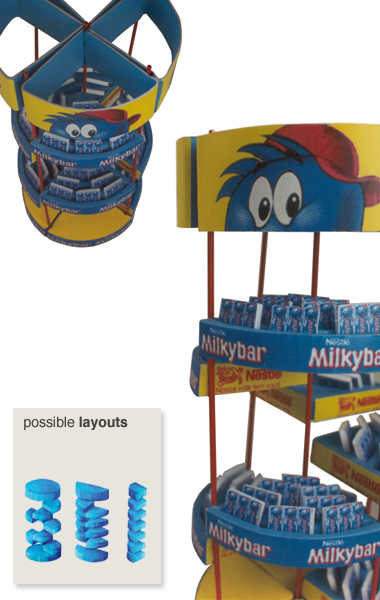 A point-of-sale display destinated to promote the sale of Milkybar, a chocolate milk. Its design permits three different layouts according to the available area in the store. **With Isabela Menezes and Raquel Barbariz / Orientation: Leonardo Visconti**
:: at ESDI, Escola Superior de Desenho Industrial da Uerj, 2001 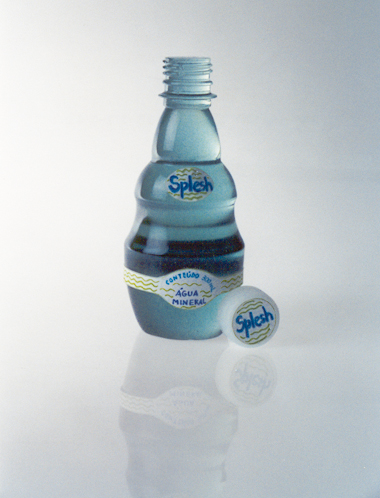